My grandfather was a reader. He had bookshelves in his house, both in Elgin and in Chetek. Some were from his childhood: Horatio Alger series; some were from later in his life: Have Pen will Travel. I read many of the books on his shelves when I visited my grandparents in Chetek — two that will make an appearance next month. 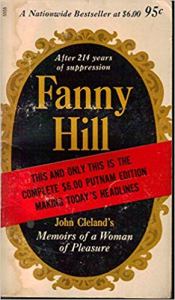 A book that was not on the bookshelves in either house was a book I found in a box in the garage. As I recall, most of the titles in the box of paperbacks did not seem interesting to me, a teenager. I think they were private eye books and I was not interested in reading those. I did find one book that looked interesting, so I picked it up out of the box and took it down to the long dock to read and sunbathe.

It wasn’t what I expected at all. I think, since I loved Gothic romances (Victoria Holt was one of my favorite authors at the time), I expected it to be about a woman named Fanny who fell in love with a land owner.

I didn’t expect it to be about sex.