I’ve read blog posts, articles, and book chapters on decluttering and nothing ever stuck. I’d get excited about a method, try it, and soon fail. It wasn’t until I read a chapter or two from Dana K. White‘s Decluttering at the Speed of Life that I reached that “aha!” moment. It was her words that a house is a container and can only hold so much stuff.

My husband and daughter think I’m nuts that this was a foreign concept to me, but I honestly never thought of it that way. I kept buying stuff and tried to find places for it without getting rid of anything else. Okay, occasionally I would get rid of things to make room for other things, but that was often accompanied by anxiety — what if I still needed that other thing that I just donated, gave away or threw in the trash?

White’s example about scarves is what did it for me. She used scarves just as an example of something we might have too many of. She asked the reader to imagine our closet floor covered in scarves and think of ways to organize them, but still scarves covered the closet floor. Then she suggested we imagine a box for the scarves and we could only keep the scarves that fit in the box. After that is when she blew my mind suggesting that our entire house is a container.

I’ve only read about a quarter of the book, but the container analogy reset my thoughts on stuff. Maybe I expected that we’d buy a new and bigger house to store more stuff. Or maybe I expected the kids to take their stuff so I could store more of my stuff. Neither of that is happening — at least not in the foreseeable future, so I need to remember the container analogy and get rid of whatever does not comfortably fit in whatever container I have for my personal stuff.

Yesterday I cleaned out the containers that hold my clothes and shoes: Dresser drawers and closets* (in-season and off-season). If I keep this up I think I won’t need in- or off- season containers — just one of each for all my clothes. 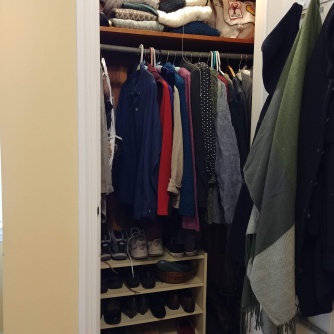 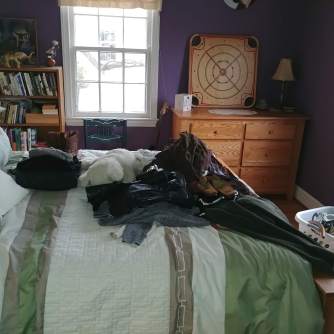 Pile of give away items (not the bear — he stays)
I have plenty of clothes now for both seasons and plan on not purchasing anything else clothes-wise for a while. I’ve got one StitchFix shipment on the way, but will likely send it back without buying anything and cancel my subscription. I think my clothes hoarding/impulse buying was a result of not having nice clothes for years and feeling embarrassed about that.

*We live in a 1940s house with tiny closets in each room (plus a coat closet I use for my hanging clothes — Dean gets the bedroom closet).